Itraconazole (also known as Sporanox®) is an anti-fungal triazole compound first approved by the FDA in 1992 for the treatment of systemic fungal infections1. Itraconazole is well tolerated and is broadly effective against multiple types of fungus, including Candida and Aspergillus species, Cryptococcus neoformans, and many others2. The anti-fungal activity of itraconazole is mediated through its inhibition of cytochrome P450, a critical metabolic enzyme. Cytochrome P450 is required for the processing of lanosterol, the compound from which ergosterol is derived. Ergosterol is an integral cell wall component specifically found in fungi. Disrupted lanosterol metabolism prevents ergosterol synthesis, which severely compromises fungal membrane and cell wall integrity and leads to cell death3. 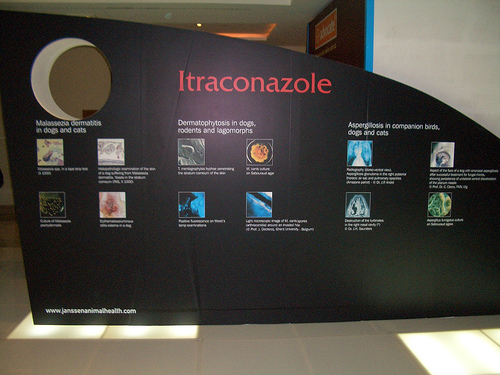 Nail fungus (onychomycosis) is the most common affliction of the nails, characterized by abnormal nail color, texture, and thickness. Nail fungus is caused by an infection of one of several possible species of fungi, with humidity, improper footwear, nail trauma, genetic predisposition, and immunosuppression considered contributing factors4. Both continuous and pulse itraconazole treatment regimens have demonstrated efficacy against nail fungus. A clinical response can be observed after several months of systemic treatment with orally administered itraconazole in over 80% of patients. Long-term remissions are observed in the majority of patients, although a small percentage of patients that have been successfully treated do ultimately relapse. Factors affecting treatment outcome include the site of infection (fingernail vs. toenail) and the species underlying the infection5,6. The efficacy of itraconazole in achieving clinical response and long-term cures of nail fungus is likely attributable to its ability to be absorbed into the nail and remain there at therapeutic levels for at least 6 months after completion of treatment5,7.

In addition to its use in the eradication of nail fungus, itraconazole has been used for treatment and prevention of systemic fungal infections in immunocompromised cancer patients8. However, recent studies have suggested that azole anti-fungal compounds may also be directly effective against certain types of cancer and prolong patient survival. Econazole kills leukemia, breast cancer, and colorectal cancer cell lines in a dose-dependent manner and slows the growth of colorectal cancer in mice9-11. Ketoconazole also suppresses the growth of colorectal cancer in mice, and potentiates the activity of nocodazole, a known chemotherapeutic agent12. Moreover, combination chemotherapy including ketoconazole increased the response length and overall survival of patients with androgen-independent prostate cancer13.
Intriguingly, accumulating evidence suggests that itraconazole may in fact be an even more potent chemotherapeutic agent than econazole or ketoconazole. Several recent studies have demonstrated that itraconazole specifically targets key molecular pathways involved in cancer. Itraconazole was shown to inhibit the mammalian target of rapamycin (mTOR) pathway, a signaling network regulating cellular growth and proliferation that is frequently activated in tumors. Inhibition of mTOR signaling by itraconazole is dependent on the aforementioned ability of itraconazole to block metabolism of lanosterol, which is also a precursor of cholesterol in humans. Proper synthesis and transport of cholesterol within the cell is required for mTOR pathway activation14. 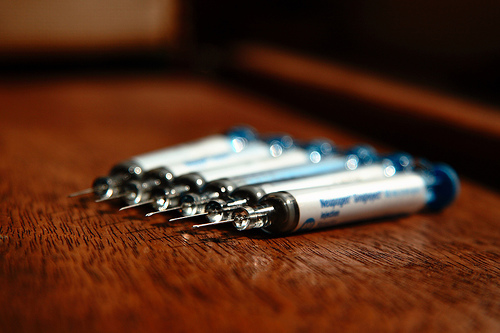 The Hedgehog (Hh) pathway, normally involved in embryonic development and stem cell regulation, is another signaling cascade that is aberrantly activated in a variety of human tumors. Itraconazole was recently identified in an unbiased screen for small-molecule antagonists of the Hh pathway, with inhibitory activity over 10 times more potent than any other azole anti-fungal. Interestingly, unlike the mTOR pathway, the role of itraconazole in Hh pathway inhibition is not dependent on its role in cholesterol biosynthesis, but on its ability to compete with natural activators of the essential Hh pathway component Smoothened (SMO). Experiments in mouse models of medulloblastoma and basal cell carcinoma harboring activating mutations in the Hh pathway further demonstrated that itraconazole could suppress the growth of Hh-dependent tumors15.
Another key feature of tumors is their ability to induce angiogenesis, or the formation of blood vessels, to obtain their own blood supply. Itraconazole was also identified in a screen for small molecules that block proliferation of the cells that constitute the inner lining of blood vessels. As with the Hh pathway, the inhibitory activity of itraconazole was unique among all azole anti-fungals. In addition to inhibiting cell cycle progression of endothelial cells in vitro, itraconazole was shown to suppress growth factor-dependent angiogenesis in mouse models of blood vessel formation, indicating its potential use as an anti-angiogenic compound16.
Itraconazole has also been linked to regulation of cellular processes that protect against cancer. Cytokines are small molecules that serve diverse functions within the body’s immune system and during cancer progression. Certain types of cytokines that are released in response to infection and inflammation can activate immune cells capable of killing tumor cells. However, other types of cytokines that promote proliferation and survival of normal blood cells can be exploited or produced by cancer cells. Itraconazole is a modulator of cytokine activity that can both increase production of cytokines involved in host defense and lower levels of cytokines that promote leukemic cell growth17,18.
Another important component of the body’s defense against cancer is the production of antioxidants that protect tissues from the potentially cancer-inducing effects of carcinogens, mutagens, and naturally occurring free radicals. NAD(P)H:quinone oxidoreductase 1 (NQO1) has been shown to be a direct target of itraconazole. The major role of NQO1 is the maintenance of cellular levels of antioxidants, but NQO1 also contributes to the stabilization of tumor suppressor proteins. Itraconazole treatment increases NQO1 levels, and therefore may promote both cellular detoxification and tumor suppression19.
Together, these studies suggest that itraconazole, an anti-fungal compound currently used to treat nail fungus, may also be a novel chemotherapeutic and chemoprotectant agent. Because the anti-fungal effects of itraconazole have been extensively studied for over 25 years, its safety and potential side effects are already well characterized. Excitingly, the doses of itraconazole already used to treat nail fungus and other types of systemic fungal infections result in blood serum levels well within the range needed to achieve the observed anti-cancer effects15,16. Clinical trials to determine the effect of itraconazole in treating lung cancer, skin cancer, prostate cancer, breast cancer, and leukemia are now underway20.

7 Matthieu L, et al. Itraconazole penetrates the nail via the nail matrix and the nail bed – an investigation in onychomycosis. Clinical and Experimental Dermatology 16(5): p. 374-376 (1991).

20 ClinicalTrials.gov: A service of the National Institutes of Health.