The answer to this question is not as straightforward as you might think and even doctors get it wrong sometimes. Proper diagnosis is important because treatment can take a long time, can be expensive, and may be associated with certain side effects. If you suspect you have a nail fungal infection, you should know the symptoms of nail fungus(onychomycosis) and make sure that your physician performs the proper diagnostic tests.

Onychomycosis, or a nail fungus infection, is defined as a fungal infection of the nail bed, nail plate (what we think of as the nail itself) or the area very closely surrounding the fingernail or toenail. Most cases of nail fungus are caused by a dermatophyte called Trichophyton rubrum. Many other cases are caused by Candida albicans, which is a yeast. These organisms can invade deeply into the nail or stay near the surface. They can begin their infection process near the cuticle or at the tip. (Nail Fungus under a microscope) 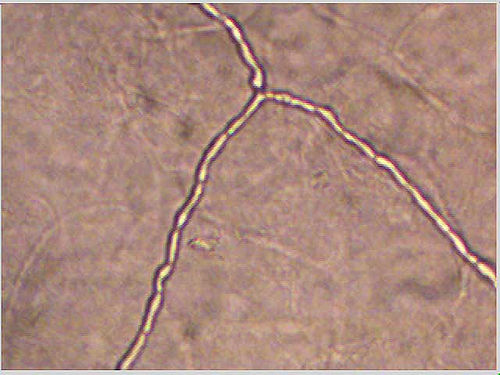 Fungal nail infections can cause a number of abnormalities in the nail. Almost all cases of nail fungus will include white, yellow, or white-yellow crust in or on the nail. This is the fungus itself. The white-yellow patches can be in the form of streaks that are parallel to the finger. Alternatively, the lesion can appear across the tip or the cuticle. When the crust spreads, it can cover the entire surface of the nail.

If the fungus penetrates underneath the nail plate (the nail itself), which is often does, it can form irregularities in the nail bed. The bumpy nail bed is less able to hold onto the nail and so it becomes loose. Since dermatophytes consume keratin and produce destructive wastes, the nail can become pitted and misshapen. This may cause ridges and grooves in the nail. 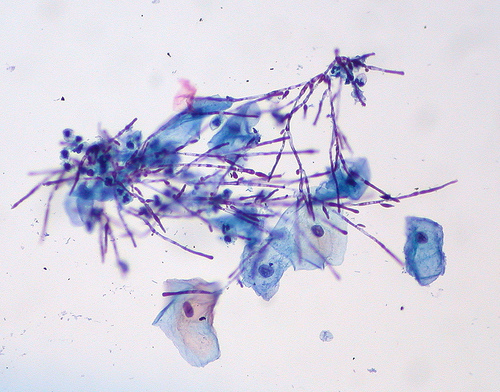 If the nail fungus infection becomes severe or contains Candida, the nail folds and skin surrounding the nail may become red and swollen. These are signs of inflammation which can cause discomfort and even pain. The skin may express (ooze) pus, which is a whitish material common of white blood cells from the immune system.
Pus is usually a sign of bacterial infection and, if it is present, may be a “red herring” for the physician trying to make the diagnosis.

A nail that is expressing pus may be assumed to be caused by a bacterial infection, as is often the case. If you are experiencing pus it is particularly important to get a correct diagnosis for the nail infection. In addition to bacterial nail infection, there are a number of diseases that can mimic a nail fungus. Examples of mimickers include hallopeau acrodermatitis, lichen planus, nail bed melanoma, nail bed psoriasis (may occur with fungal infection of the nail), onycholysis, paronychia, Reiter syndrome, or yellow nail syndrome. This means that one or more diagnostic tests are necessary to make the correct diagnosis of onychomycosis.

Testing for a nail fungus requires that a piece of the diseased nail be taken for further study and analysis. If the disease affects the tip of the nail, like in distal subungual onychomycosis, a small piece of nail can be trimmed from the end. Unfortunately in proximal subungual onychomycosis the nail must be removed down to the base. On the positive side, this nail removal can be therapeutic as well as diagnostic. In white superficial onychomycosis, the lesion is scraped away from the top of the nail.
Once a piece of the diseased nail is harvested, two main tests are performed on the sample. Some of the nail can be treated with a strong base, namely potassium hydroxide, and viewed under a microscope for the presence of fungi. The remaining piece of nail can be sent for a fungal culture. The sample is placed in an environment in which fungus can grow and thrive and, after a few days, the sample is checked for growth of new fungus. The presence of fungus in one or both of these tests is good evidence that an onychomycosis is present. If neither the potassium hydroxide wash nor the culture show fungus, the nail can be taken, pulverized, and sent to a pathologist for analysis. Alternatively a portion of the nail can be sent for a bacterial culture in case the nail infection is not fungal.

If you suspect that you have nail fungus symptoms, the diseased nail or nails should be looked at by a physician, ideally a dermatologist. Proper diagnosis of the illness is important for directing care and ruling out for serious problems.